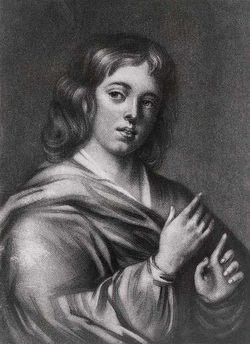 Edward Kynaston was one of the most famous boy players in the early Restoration period, which was the last time that men commonly played female roles on the English stage. He was born about 1640, and he found his theatrical connections by serving as the under-apprentice to apprentice Thomas Betterton at a bookshop in the 1650s during the Interregnum. The bookshop was owned by John Rhodes, a former wardrobe keeper who opened a theatre almost immediately following the end of Cromwell's Protectorate, as early as 24 March 1660. It is believed that Kynaston first acted as a part of this troupe.

It is from a description of Kynaston by the prompter John Downes that Stage Beauty takes its name: "being then very Young, made a Compleat Female Stage Beauty, performing his parts so well, especially Arthiope and Aglaura, being Parts greatly moving Compassion and Pity; that it has since been Disputable among the Judicious, whether any Woman that succeeded him so Sensibly touch'd the Audience as he." The actor and playwright Colley Cibber tells us that ladies took Kynaston with them (still in his costume as a lady) to visit the parks, just as he does in Stage Beauty.

Because actresses began to appear so soon after the return of Charles II, Kynaston's career as a boy player did not last long. For a while he played both female and male roles, but demand for boys to play women decreased sharply as actresses became more numerous and more prominent. However, he navigated the transition to male roles easily, and by 1664 was a prominent actor with a share in the King's Company.

The occasion in Stage Beauty where Sir Charles Sedley had Kynaston beaten also happened in real life, though considerably after the events of the play are said to have taken place. According to the Biographical Dictionary of Actors, Actresses...and Other Stage Personnel in London, 1660-1800, vol. 9, "Pepys went to the Bridges Street playhouse on 1 February 1669, expecting to see Cavendish's The Heiress, but the theatre was closed: '...Kinaston, that did act a part therein, in abuse to Sir Charles Sedley, being last night exceedingly beaten with sticks, by two or three that assaulted him, so as he is mightily bruised, and forced to keep his bed...the King was very angry with Sir Charles Sedley for Kynaston's being beaten, but he do deny it.'" The relationship between Kynaston and the Duke also has tenuous roots in history; there is a lampoon dated 1678 about the Duke which includes the line "and Kenastons arse knows its own Buggerer."

Overall, Kynaston was just as successful in men's parts as he ever was in women's, and he acted in them them for a great deal longer. Cibber describes an older Kynaston thus: "He had something of a formal Gravity in his Mien, which was attributed to the stately Step he he has been so early confin'd to, in a female Decency...He had a piercing Eye, and in Characters of Heroick Life a quick imperious Vivacity in his Tone of Voice that painted the Tyrant truly terrible...he had a fierce Lion-like Majesty in his Port and Utterance that gave the Spectator a kind of trembling Admiration!"


Sources: An Apology For The Life Of Colley Cibber by Colley Cibber, A Biographical Dictionary of Actors, Actresses, Musicians, Dancers, Mnagers, And Other Stage Personnel in London, 1660-1800, vol. 9 by Philip H. Highfill, Jr., Kalman A. Burnim, and Edward A. Langhans